So my ballet class has been threatening to all get together to go see a performance. A few people did it once before, a venue here in LA set up a link so that you could buy group tickets on your own. That way you could buy tickets as a group but not necessarily sit together. They went to see NYCB. I didn’t go because that was the night that I was going to go see boys in tights, hot men dancing, you know… Kings of the Dance. At any rate, the Los Angeles Music Center doesn’t do the link thingy. You can buy group tickets that aren’t together, but you have to buy them from the box office all at one time. FYI, in case you ever want to do that, they are very nice and very efficient and the savings is substantial. Anyway… I posted a “hey let’s do this” onto Facebook and got enough positive interest that I asked the Awesomest Ballet Teacher (formerly known as the Awesome Ballet Teacher) if he wanted to organize a field trip. You know how when you suggest something you end up being in charge of it? Yeah, that happened. Long story short, we got a group of 16 people together for an evening at the Dorothy Chandler Theatre to go see some ballet!

It was the second performance by the Bolshoi Ballet of a four night run. Our cast included Ekaterina Krysanova as Odette-Odile, Rusian Skvortsov as Prince Siegfried, Vladislav Lantratov as the Evil Genius (known to us as Von Rothbart, doesn’t translate into Russian perhaps?), and Denis Medvedev as the Fool (who we more magnanimously refer to as the Jester). It was a gorgeous production – luscious costumes, beautiful sets and lighting, good tempo, and nice storytelling. The dancing was pure Russian, high jumps, torso’s pulled up to the sky, wicked fast footwork and meticulously perfect corp work. That’s not to say there weren’t any mistakes but that’s something that makes live performances so awesome. When Ekaterina was doing her 32 pirouettes she started to lean over somewhere abound the 12th one or so and bam like a warrior, pulled back up straight and finished them coming forward on the stage. Gorgeousness. To see that kind of strength was just so amazing. Then during the swans sequence, one of the swans bit it, she fell right on the floor. But instantly she bounced back up and within seconds, literally, seconds she was right back in synch and we completely forgot which one almost ate marley floor. It’s really inspirational for a ballet student to realize that ballerina’s don’t always get it perfect, but they fight for it and they can win!

And when it was over, we all stood around sharing that goofy smile that only yummy ballet can give you and we chatted in the plaza with a ballet glow that rivaled the twinkle lights in the trees and fountain. It was a great evening and one that I hope we repeat and often.  I’ve said before that I believe watching ballet to be an important part of studying ballet as a dancer. I think it’s another plus in learning to attend the ballet with the people that you study with! We had some great conversations, the Awesomest Ballet Teacher talked about it in class today, and I’m sure that we’ll be talking about it for weeks, months, to come! 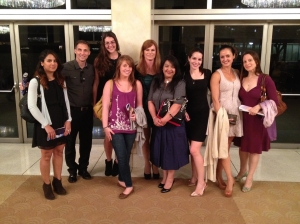 Do we all love the four little swans or what!!!  This isn’t from last night but it’s still good. 🙂

Blogs Not To Be Missed!

Error: Twitter did not respond. Please wait a few minutes and refresh this page.