Guys, I don’t even know where to start!! I went to Shanghai last week to attend Patrick de Bana’s All Star Ballet Gala. I’d been excited about it from the very second I heard about it. Patrick de Bana, Manuel Legris, Svetlana Zakharova, Matthew Golding, Maria Eichwald, Fan Xiaofeng, and, holy moly, the return of Isabelle Guerin!!! Patrick de Bana was choreographing a new piece for Isabelle and Manuel, for that alone I was determined to go to China.

You might remember a while back – at the last Manuel Legris gala in Tokyo – I got some sort of abnormal surge of bravery and talked to Patrick de Bana at the stage door after the last performance. He was incredibly nice and more than a little surprised that I traveled all the way from Los Angeles to Tokyo just for a ballet performance. Since then we became “friends” on Facebook but let’s face it, being “friends” on Facebook doesn’t necessarily mean anything.

In January of this year I went to Paris to see the homage to Manuel Legris gala. Manuel and Patrick both danced at that gala as well. I went to the stage door but didn’t have the bravery to stay. Apparently in Paris it’s not cool to go to the stage door the way it is in Japan. I felt silly standing there by myself, stalkerish. Plus I was positive that neither Patrick nor Manuel would remember me or worse that they would remember me, the mute girl who suffers from temporary strokes and loses the ability to speak whenever they are around.  Either way I could safely assume that I would have a temporary stroke, go mute, stand there without brain function and thusly assure myself a place in the dork hall of fame. I didn’t even have the safety of a crowd to get lost in. Turns out there’s great security in the anonymity of a whole bunch of ballet fans. But on the plane ride home I got a really sweet message from Patrick asking why I didn’t come by to say hello. I was shocked and amazed that he not only remembered who I was but actually thought of me.

So when I couldn’t find a way to get information and tickets online for the gala in Shanghai, I took a chance and sent Patrick a message. Next thing I know I’m having a lovely conversation, I’ve got an offer for comped tickets and, good grief, I’ve got the man’s cell phone number and instructions to text him when I get to Shanghai!!!

If you want to read about the AMAZING and GORGEOUS gala, Isabelle Guerin’s triumphant return to the stage, how Carboy spent an evening talking cars with Matt Golding over Chinese food, how I got turning tips from the Director of the Shanghai Ballet, and how I took this photograph… 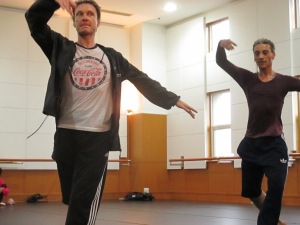 you’ll have to stay tuned and come back as the Shanghai saga unfolds!!

Blogs Not To Be Missed!

Error: Twitter did not respond. Please wait a few minutes and refresh this page.