This is Atticus. He was sitting in doggie death row in the animal shelter when we found him. He had been turned in because he grew to be a very big boy. When the horrid people that he lived with as a puppy turned him in, he was infested with fleas which gave him a nasty skin condition on his butt and he had an upper respiratory infection. He was also underfed for a boy of his age and size. To be perfectly honest, he was pretty pathetic. But one look and I knew that he was mine. My AttyBear is sweet, patient, gentle, and pretty lazy. He loves cheese, especially Brie, and is probably the only dog on the planet that does not like peanut butter. We lost his beautiful partner, Aretha, recently and he has been getting accustomed to being an only dog. It’s been a hard adjustment and he has become very attached to both Carboy and I as a result. I am grateful to have his lovely presence in my life. He teaches everyone unconditional love and humility. And he loves to dance! 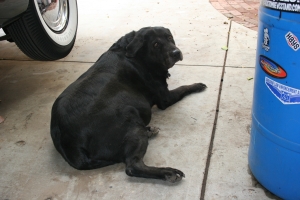 I'll be taking a break from social media for the month of May. Be well and see you all later 👋🏼